Hyundai has just released a 2014 Sonata mid-size sedan in the USA.

The mid-cycle facelift should make the
carmaker’s second best-selling model in the USA even more appealing and
attractive to the U.S. shoppers.

The big news today, however, is not the 2014
Sonata, but rather the next-generation model that has been spotted testing in
the USA and Korea.

Just recently, the automobile spies have
caught testing a heavily camouflaged prototype in the wild and that appears to
be the next-generation Hyundai Sonata.

We have learned that the next generation
Sonata mid-size sedan will be launched next year as a 2015 model. 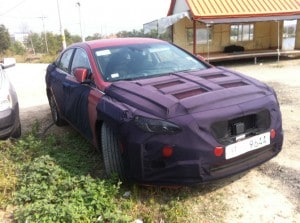 As evident from the spy pic here, the 2015 Sonata will adopt redesigned sheet metal, along with
completely redesigned front and rear fascias.

The next-generation model is also likely to
get several changes inside and will also incorporate various high-tech
features.

The engine specification is rumored to remain
the same, however the powertrain will be tweaked to offer higher performance
and provide better fuel economy figures.

The 2015 Hyundai Sonata is expected to be
launched in the USA in the fourth-quarter of 2014.